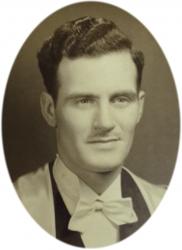 Daniel Morton Lund died suddenly of a stroke at his home in Sackville, N.B. on November 9, 2013. He was in his 93rd year having been born on September 3, 1921 in the house in which he died to the late Daniel Purrington Lund and Gertrude Viola Lund ( nee Bird), former long-time residents of Sackville.

His home, built by his grandfather over 100 years ago, has been inhabited by three Lund generations.

He attended Sackville Public School and Sackville High graduating in 1938 into the midst of the Great Depression and few work opportunities. He was night caretaker at Cranewood after its fire and enlisted in the Royal Canadian Air Force, as it then was, in 1940 with the intention of being a pilot or at least a member of the air crew. He tested colour blind and was rejected for air crew; this event probably saved his life. The young Sackville boy who enlisted with him and was assigned the next regimental number became an air gunner and was killed in action.

Always a generous brother, he saved his depression earnings to buy a bicycle for his his younger brother so he would have the joy and mobility that he himself and his family had not been able to afford.

He remustered to become a radar technician after training at the University of Western Ontario and the Radar School in Clinton, Ontario and was assigned to duties in Great Britain in 1942. He served on radar stations in Morpeth, Sandwich and Luton helping to keep open the electronic eyes which enabled allied fighter pilots to find and repulse enemy aircraft.

On D-day he was on leave in London and able to join the celebrating crowds outside Buckingham Palace. Many years later at the commemorative celebrations of the Battle of Britain he was able to relive those events and take part in the Remembrance Service at Westminster Abbey.

On returning to Canada, he continued his education at Mt. Allison University earning his Engineering Certificate in 1948 and at Nova Scotia Technical College, as it then was, graduating as an electrical engineer in 1950. He returned to the University of Western Ontario for a further year of studies before joining Northern Electric where he used his experience with radar to participate in the building of a network of radar station across northern Ontario and Quebec.

He returned to the Maritimes in the 1960's and worked for a time with Faerie Battle before joining New Brunswick Power where he worked in its communications department until his retirement in 1986.

He came home to Sackville and slowly entered into a quiet new career as a benefactor for the preservation of old historic buildings. He played the role of Mr. Boultenhouse at the opening of the Boultenhouse Museum and shared his vision of a once busy port scene across the marshland where sailing ships had once sailed and been built.

He also endeavored to save and restore the Black Store but its failing timbers thwarted his efforts and he responded to its fate with great sadness.

In retirement he attended many radar reunions in England and found, often after much searching, the radar sites on which he had once served.

In his last year he worked on his plan for a final gift to the community of Sackville and died confident that it would come to pass even if he would not be there to celebrate it.

He is survived by his brother, Kenneth, (wife Mary), and Kenneth’s children, Murray (wife Branka) and their children Christopher, Katarina and Stephanie; Allison (partner Glenn) and Kimberley (husband Benjamin) and their children, Charlotte, Anderson and Noelle and the family of Eileen, his late sister, Gwyneth Newell (husband Daniel), their two children, Shira and Reuben and Reuben’s daughter Lily Anna, and nephews, Edward Foster and Kenneth Cove.

Funeral Arrangements have been entrusted to the Jones Funeral Home, 70 Bridge St., Sackville, NB (506) 364-1300 where visiting hours will take place on Friday from 7 to 9 pm.  The Sackville Royal Canadian Legion will be holding a memorial service on Friday evening at 7 pm at the funeral home.  The funeral service will be held at the Jones Funeral Home on Saturday, November 16, 2013 at 11 am, Rev. Catherine Smith officiating.  Burial will follow in the Sackville Cemetery.

Those wishing to make a donation in Daniel's memory may do so to the Tantramar Heritage Trust or the charity of your choice.