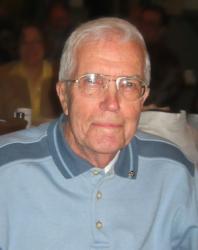 Born in Westcock in 1925, he was a son of the late Fred and Lalia (Tower) Atkinson.

Joe graduated from Sackville High School in 1943, and served till the end of the Second World War in the Canadian Navy. He received a certificate in Business Administration from Mount Allison University in 1947 and was immediately employed with Atlantic Wholesalers where he remained until his retirement in 1987.  Joe was past president of the local curling club, Sackville Golf and Country Club and the Sackville Rotary Club.  He was the recipient of two Paul Harris Fellowships from Rotary International for service to his community.  He served on the board of the Drew Nursing Home, the Sackville Memorial Hospital Board and the Sackville Memorial Hospital Foundation.  He was a member of the Saint Andrew's Presbyterian Church.  Since retiring much of his time was spent traveling, golfing, gardening and volunteering.

Joe is survived by his wife of over 60 years, Pauline (Brenton), daughter Suzanne (David) Weintraub, Liverpool, NS; son Logan (Elizabeth), Ottawa, ON and 3 granddaughters, Catherine, Emily and Aynsley, as well as several nieces and nephews.  He was predeceased by brothers Hartman, Freddy and Robert, sisters Netta Estabrooks and Vida Trenholm, and twin brother, Benjamin in infancy.

Cremation has taken place under the care and direction of Jones Funeral Home, 70 Bridge St., Sackville, NB (506-364-1300) where visitation will take place on Tuesday May 4, 2010 from 7 to 9 pm.  A memorial service will be held at the funeral home on Wednesday, May 5, 2010 at 2 pm, Rev. Jeffery Murray officiating.  Internment will take place in the Westcock Cemetery.

Those wishing to make a donation in Joe's memory may do so to the Westcock Cemetery, the Sackville Memorial Hospital Auxiliary, St. Andrew's Presbyterian Church, or the charity of  your choice.