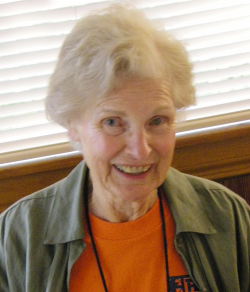 "A book with many chapters"

Emma Buenaventura passed away peacefully at home in Sackville, New Brunswick, on December 20, 2022, at the age of 95.   She is survived by her spouse, Judith A. Weiss, her brothers Jaime and Alejandro and her sister Constanza, and she was predeceased by her parents Cornelio Buenaventura and Julia Emma Alder and eight brothers and sisters.  Born in Cali, Colombia, on November 15, 1927, her childhood was enriched by the visits of many world-famous artists and musicians who were invited by her sister-in-law, a concert pianist, and her brother, a playwright and director.

She went to Washington, DC at the age of twenty for knee surgery and ended up working at the Pan American Union (Organization of American States).  She was able to accomplish this while studying English in night school, ignoring her uncle’s advice to learn Sanskrit first. After a year on scholarship at the recently established school of Library Science in Havana, Cuba, in 1952, she joined the staff of the Columbus Memorial Library of the Pan American Union, becoming head of cataloguing.   After retiring in 1973, she pursued further undergraduate and then graduate studies at the University of Maryland, and taught Spanish and Latin American literature at the College Park and Baltimore County campuses.  A founding member of the Colombia Human Rights Committee in Washington, Emma also volunteered with the Torture Abolition and Survivors Support Coalition.  One of her most vivid memories was being present at the 1963 March on Washington led by the Rev. M.L. King, Jr.  She also participated in marches against the Vietnam War and in numerous other rallies on the National Mall through the years (for Central America, for Women’s Reproductive Rights, for Gay Rights, for Racial Justice).

Over the years, she travelled through Latin America, Europe and the United States.  She became a landed immigrant in Canada in 2004.

An early subscriber to the independent socialist journal Monthly Review, she was a lifelong reader of history, classical economics, and philosophy.  She liked to quote these lines from the 17th century independent thinker Benedict Spinoza, whom she considered her guide since adolescence: "The highest activity a human being can attain is learning for understanding, because to understand is to be free," and "Do not lament or hate. Understand."

She followed critical Latin American political analysis assiduously and looked to social movements to keep alive hopes for peace and social justice in her native Colombia and other countries.

Emma was a devotee of opera, chamber music, and sacred and baroque music. Her passionate love of Western classical music was as instinctive to her as her mother tongue. Every nuance was experienced emotionally and spiritually in her heart and soul. She enhanced her deeply intuitive understanding of the complex language of music through broad-based listening, reading, and the posing of insightful questions to her musician friends.

Equally passionate about literature, she loved and reread Cervantes, Thomas Hardy, George Eliot, Dickens, Tolstoy and Dostoyevsky.  Hence it is easy to understand why she had no time for small talk but was always asking probing questions that offered insights, questions that sometimes stayed with a person for a long time.

What various friends have said about her:

"Your wit and your sharp mind will always challenge me to think more clearly. Your passion and your critical engagement with all things political and your insightful questions will be a guide."

"I can hear Emma’s voice telling stories so passionately and beautifully.  I don’t remember everything she said. It was more the way she told them."

"She was one of the wisest and most uncompromising persons I’ve known."

"Emma was a straight shooter and did not sugar coat the pill for anyone!"

"One always knew where they stood with Emma, unapologetically direct, honest, and genuine."

Her nieces and nephews look up to her as a role model and inspiration.

It should also be said that her comic timing was impeccable, as was her skill in shelling and eating lobster.

Emma and her family are especially grateful to Dr. A.C. Johnston and to the Extra-mural nurses, who have been unfailingly kind and knowledgeable.

Arrangements are under the care and guidance of Jones Funeral Home, 70 Bridge Street, Sackville.  Cremation has taken place and there are to be no services at this time.

In lieu of flowers, please support and patronize the arts and cultural activities.