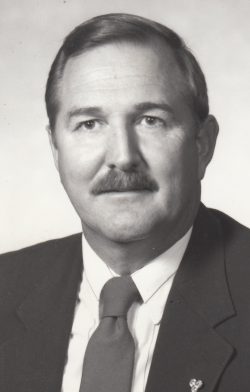 It is with great sadness that we announce the passing of Parker William "Bill" Holmes, 76, of Amherst and formerly of Sackville following a brief illness. Bill passed away on Tuesday, November 22, 2022 at the Cumberland Regional Health Care Centre in Amherst.  Bill was born in Sackville, a son of the late Laurie and Georgina (Atkinson) Holmes.

Bill graduated from the Maritime Forest Ranger School in the sixties and took employment as a forest ranger for several years in the Sussex and Coles Island areas prior to becoming a police officer.  He worked in this role for the towns of Oxford, NS, Port Elgin, NB and then Sackville, NB until 1994, affectionately being known as "Billy" and "Inspector Gadget". Following his departure from the force, he and Rose constructed an apartment building on King Street and Bill took on the role of a much-loved and respected landlord until 2019.

An avid outdoorsman Bill enjoyed hunting and fishing.  He was passionate and knowledgeable in all things firearms related.  He enjoyed sharing his skills with others through education and as a firearms safety and competency instructor.  In addition, Bill had started as a reservist with the 8th Canadian Hussars before moving on to C.O. of the Sackville Air Cadet Squadron, finally returning to the Hussars as a Lieutenant.

Bill will be fondly remembered for how much he enjoyed spending time with his variety of collectibles in the basement and family room.

Besides his parents, Bill was predeceased by a brother-in-law, Kevin Evans and a son-in-law, Arthur Miller.

Arrangements are under the care and guidance of Jones Funeral Home, 70 Bridge Street, Sackville, NB (506-364-1300).  Honouring Bill's wishes, cremation has taken place.  An afternoon of remembrance will be held at the funeral home on Sunday, November 27, 2022 from 2-4 pm.

Donations in memory of Bill may be made to the Canadian Cancer Society or a charity of the donor's choice.