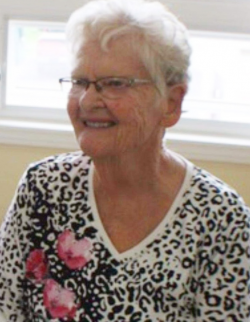 Service Information
Service Time
Honouring Dot's wishes, cremation has taken place and there are to be no services at this time.
Requested Charity
Charity of choice
Send Flowers

It is with much love and fondest memories we announce the passing of our Mum, Dorothy "Dot" Elizabeth Harpell.  She slipped away from us quietly in her sleep while at the Westford Nursing Home, Port Elgin, New Brunswick, on September 27, 2022 at the age of 91.

Dot was born in Tatamagouche, Nova Scotia on January 5, 1931 to Norman and Stella (Weatherby) Bonnyman.  She burst onto the scene a very inquisitive redhead and continued life in just that way.  She loved family, travel, nature, gardening, knitting, cooking and baking, and her thirst for knowledge was lifelong.  All these things she instilled in her children, setting us all up for a life of nature filled adventures.

Dot was educated at the Oliver School, then Tatamagouche Rural High School and later Miss Murphy’s Business College.  Loosing her own mum at 15, she grew up fast.  She worked at the telephone office in Tatamagouche and at the age of 17 went to work for Nova Scotia Light and Power in Halifax.

She met and married Charles Harpell in 1954 and they moved from Halifax to the family farm in Tatamagouche to look after her father and began their family.  There they raised 4 children and instilled in them the love of life, travel and nature.

Always up for an adventure, they moved to Lethbridge, Alberta in 1981 and returned to Tatamagouche in 1983.  During her time in Lethbridge, she took a Medical Receptionist course via correspondence and once back in Tatamagouche, worked at the Lillian Fraser Memorial Hospital until her retirement.

After their retirement, they ventured to Cranbrook, British Columbia, having children and grandchildren in both Cranbrook and nearby Lethbridge and Taber, Alberta.  They soon settled in Wycliffe, BC where they loved walking in the "Pine Woods" with the dogs and exploring all that the area had to offer.  Weekends were spent with family and included long drives to the middle of nowhere and back, picnics and exploring the mountains, lakes and rivers.  Sunday suppers and jigsaw puzzles, the bigger, the better and camping (into their 80’s) were always a part of her commitment to keeping family close.

In 2013, Mum and Dad moved back to the Maritimes, staying with Sherry and her husband Jerry in Port Elgin, New Brunswick.  There they continued to enjoy many adventures including touring the property on the side-by-side and exploring the unchartered to them areas of New Brunswick.  Dad moved into the Westford Nursing Home in 2015 and Mum joined him in February of 2019.  They were together for 66 years.

We would all like to say a special thank you to the staff of the Westford Nursing Home for the love and care they gave to both our mother and father during their time with you.  A huge thank you from Shaun, Glenn and Carla to Sherry and Jerry for the unending love and support you gave to them both during their final years.

She was predeceased by her husband Charles, brothers Carl, Earl, Leslie, Fred, and sister Muriel (Vincent).

Arrangements are under the care and guidance of Jones Funeral Home, Sackville and Port Elgin, NB (506-364-1300).  Honouring Dot's wishes, cremation has taken place and there are to be no services at this time.

Donations in Dot's memory can be made to the charity of one's choice.

Memories and condolences may be sent to the family by visiting the online memorial at www.jonesfuneralhome.ca or through the Jones Funeral Home Facebook Page.