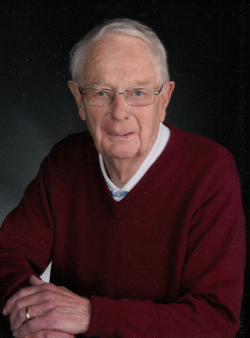 It is with deep sadness we announce the passing of Aubrey Wood Atkinson, age 87, of Sackville, NB.  Aubrey passed away at the Sackville Memorial Hospital on Friday, September 9, 2022.

Born in Baie Verte, NB, Aubrey was a son of the late Fred and Dorothy (Wood) Atkinson.

Aubrey was a school teacher for 35 years, starting at Rothesay Collegiate for 9 years, then coming to Sackville High School in 1967, which then became Marshview Middle School where he retired as Principal. He was a member of the Sackville United Church.  Former Chairman of the Tantramar Planning District Commission and a member of the Board of Directors of the Drew Nursing Home.

Aubrey was a life long participant in athletics.  He was the first person in the Maritimes to break the 10 second barrier in the 100 yard dash.  In 1955 he was the athlete of the year at Mount Allison University, starring in three sports, track and field, hockey, and soccer.  After university, he continued his involvement with track as a coach and a starter.  He officiated track meets throughout Canada including the Olympic trials in Toronto.  He was a lifetime member of the Sackville Curling Club, and a 55 year member of the Sackville Golf Club.

Grampy was a huge supporter of all his grandchildren's endeavours in the triple A's; Academics, Athletics, and Arts.  His smiling face will be missed by many around the rinks.

Aubrey was predeceased by his wife Ann Atkinson in 1996.

Arrangements are under the care and supervision of the Jones Funeral Home, 70 Bridge Street, Sackville, NB (506-364-1300), where visiting hours will take place on Tuesday from 2 to 4 and 6 to 8 pm.  His funeral service will be held at the Jones Funeral Home on Wednesday, September 14, 2022 at 2 pm, Rev. Lloyd Bruce officiating.  Burial will follow in the Sackville Cemetery.

Donations in memory of Aubrey may be made to the Alzheimer's and Cancer Societies, or the charity of your choice.

Sharing of memories and condolences may be shared by visiting the online memorial at www.jonesfuneralhome.ca or through the Jones Funeral Home Facebook Page.