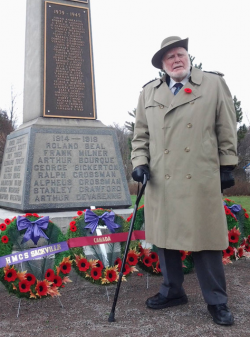 With family by his side, Ross William "RW" Galbraith passed away peacefully on July 20, 2022, in the Moncton City Hospital, Palliative Care Unit. RW was born in 1923, in Lachine, QC, to James Pettigrew and Jessie (Davidson) Galbraith. With older brother, Bruce, and younger sister, Wilma (Evans), the Galbraith children were raised in a stern but loving home where work was the currency of respect. Growing up during the Depression taught RW the critical importance of resourcefulness and resolve, attributes which would serve him well throughout the course of his life. Joining the RCAF, even before his 18th birthday, Flying Officer Ross Galbraith flew through monsoon rains, over the steaming Burmese jungle, with the other members of the ‘Chinthe’ Squadron 435 in their beloved DC-3 "Dakota" transport . . . "Best plane ever built" he would say. His amazing wartime experiences in the Far East taught him perseverance in the face of adversity, lessons that would guide him throughout the rest of his life.

Following the war, before settling down, RW’s love of the outdoors and his natural athletic talents led him to work for the Wheeler family at the Grey Rocks resort in the Quebec Laurentians. So for a time, he was a ski instructor in the winter and a fly fishing guide in the summer. It was at Ski Instructor School, in 1950, that RW met his beloved wife, Mary Lou Franklin. They wed in 1951 and would be married for 71 years. This union opened the doors to a family-filled life that richly rewarded him with love and purpose.

RW would follow in his father’s footsteps as a machinist, ultimately founding RW Galbraith & Company. His business efforts were primarily focused on the pulp and paper industry, building strainers and sprinkler systems for paper mills, but his accomplishments also included manufacturing high-precision brake-levers for diesel locomotives, trailers and even a homemade dishwasher, an early technological wonder. RW even built a number of boats. As wife Lou would always say, he "could build or fix anything". The family grew up in a home never lacking for anything, with winters spent skiing, summers at the Royal St. Lawrence Yacht Club and sailing on Lake Champlain.

As great an entrepreneur as he was, his resolve and ingenuity could not overcome the changing political climate in the province of Quebec of the 1970’s. Unable to curtail the failure of his machine shop, RW set aside resentment of his loss and moved to the United States. With his extensive contacts within the pulp and paper business, RW would finish out his work life in related businesses. Early retirement was then spent rehabbing a home to live in and a boat to sail the waters of Narragansett Bay prior to returning to Canada and settling in Point de Bute, NB, where the couple lived for 26 years.

RW is survived by his wife, Mary Lou, his son, Ross, daughter, Susan Galbraith (Jack Wassink), three grandsons, Keith (Jon Fraser) and Kieran Galbraith and Pennock Melville and daughter-in-law Margaret Ann Capper. A tremendous husband, father and grandfather, his wisdom, sense of humour and quiet humility inspired both family and friends. His legacy lives on and will remain in our hearts always.

Family and friends are invited to the funeral home for a time of public visitation on Sunday, December 4, 2022 from 6-8 pm.  A funeral service will be held at St. Paul's Anglican Church, Sackville, NB, on Monday, December 5, 2022 at 3 pm, Father Craig O'Brien and The Ven. Kevin Stockall, presiding.  Interment will take place in the Sackville Cemetery.

For those who wish to do so, donations may be made to a charity of the donor's choice.