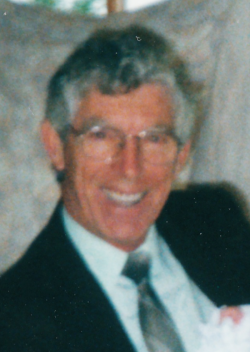 It is with heavy hearts that we announce the passing of Roland Bliss Beal, 88, on Thursday, August 11, 2022 at the Drew Nursing Home after a brief illness with cancer.

Roland was born in 1933 in Midgic, NB and was named after his uncle Roland Beal who was killed in action during WWI.

Roland didn't have opportunity for a formal education, but strove to better himself.  He worked on the small family farm right out of school, then at the lumber mill in Cookville, NB and finally a career as a pattern Maker with Enterprise Foundries until retirement.  He came out of retirement to start a "fun job" manufacturing plasma thawing units.  He was never scared of hard work or learning a new task.

Roland met the love of his life, Mona Louise McManaman, a petite brunette that caught his eye at a town baseball tournament where he was playing on the Midgic team.  They were married July 27, 1955.

He was a member of the Midgic Baptist Church and sang in the choir in his younger years with friends Gordon and Robert.  Roland had many friends over his lifetime; Alf who persuaded the land lubber to go sea diving for scallops; Alec, Orison, and Frank who were his swimming pals at Jackson's Point; Doug who convinced him to take up sailing; Robert who would snag him and head to the camp retreat feeding deer and any other creature to cross their paths; Donna and Jim who walked his socks off when enticed to participate in beach shenanigans; however the most important friendship was that of his brother Ormond, an inseparable duo on many adventures with their combined families rock hounding, Christmas tree hunting, skating parties on the late, and potato planting on the homestead.

Roland had a servants heart and could always be counted on to help anyone in need.  One of his joys in retirement was working for Brent at his restaurant as "Chief Dishwasher", teasing staff all the while expecting payment in the form of a meal or two.  Roland loved being in the woods and often went to Brian's camp on the mountain, witnessing wildlife escapades and enjoying the solitude.  Roland's greatest accomplishments were that of being a father, grandfather and great grandfather.  He could always be convinced to bend the rules and could always be counted on for support and guidance.  His echoes of laughter, his keenness for jesting, his warm heart to comfort a child, his hand to hold on walks, his humble nature, these memories are now ours to hold.

Arrangements have been entrusted to the Jones Funeral Home, 70 Bridge Street, Sackville, NB (506-364-1300).  A family only graveside service will be held in the Westcock Cemetery at a later date, Pastor Andrew Swanson officiating.

Donations in memory of Roland may be made to the Midgic Baptist Church, or a charity of your choice.

The family would like to extend their heartfelt thanks to the doctors and nurses at the Moncton Hospital, the Sackville Memorial Hospital, and the Drew Nursing Home, for their compassionate care of Roland in is time of need.