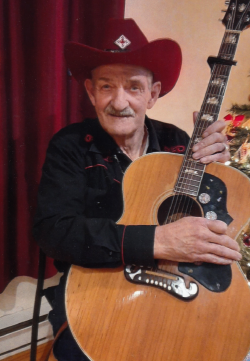 It is with sadness that we announce the death of Carl Wilson Allen, 79, of Port Elgin, NB, and formerly of Sackville, on Tuesday, June 28, 2022 at the Moncton Hospital.  Carl was born in Baie Verte, NB, a son of the late Ronald and Olive (Goodwin) Allen.

Carl had been an Oil Burner Service Technician with Imperial Oil.  He was sworn in with the Nanaimo, BC, RCMP Auxiliary Police on May 19, 1967.  He loved being in the outdoors, hunting, fishing and snowmobiling.  Carl's love for horses and the sleigh-ride camp were captured in the ornamental teams of horses equipped with harnesses and sleighs that he handmade.

Carl's true passion was his music.  He would always have his guitar and harmonica with him wherever he went, entertaining friends and family with his joking spirit and his love for step-dancing.

Besides his parents, he was predeceased by his brother in law Kevin Patterson; nephew, Keith Allen, and step-sons, Leslie and Bruce Brownell.

Arrangements are under the care and supervision of Jones Funeral Homes, Sackville and Port Elgin, NB (506-364-1300).  A service will be held at the Port Elgin location, 3 West Main Street on Tuesday, July 5, 2022 at 2 pm with burial to follow in the Fernwood Cemetery.  William Drysdale DLM presiding.

Memorial donations may be made to the Westford Nursing Home or a charity of the donor's choice.