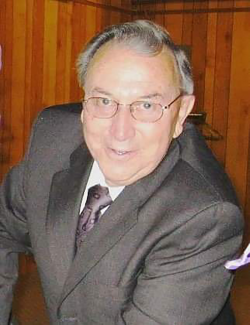 John Francis Sweeney Noonan passed away peacefully in his 97th year, on Sunday, May 22nd, 2022, with his children by his side at the Drew Nursing Home, in Sackville, NB.

Born in Melrose, New Brunswick in 1925, John worked at CNR/VIA Rail for over 31 years. Everywhere he went, he met someone he knew. John and Claudette were foster parents to Cecile and Sharon, and second parents to family and friends over the years. With an open-door policy, visitors to the Noonan Road were welcome to the eternally full, boiled tea on the stove, or a rye and ginger on occasion, naturally. After a short retirement, John tended the regional landfill and he enjoyed collecting odd treasures or items that really needed saving. He took pride in his service at Saint Bartholomew’s Catholic Church, as an extraordinary minister, caretaker and to the community at large. He spent his time on the tractor, helping others with all jobs big or small, mowing, and working the land he loved. He was an avid hunter and woodsman, with a profound respect for the land and its bounty. Except for porcupines, he hated porcupines.

John and Claudette made it to Ireland in the early nineties to explore Celtic roots, where to his chagrin; the Irish folks thought she was the Irish one! John loved music and always had a song on his mind. Early morning renditions of "Wake me up before you go go" …got the kids to the bus on time. One of the many tunes John knew by heart, and we will remember him by, as written by American songwriter Jud Strunk, says it all: "I'll give you a daisy a day dear, I'll give you a daisy a day, I'll love you until the rivers run still…And the four winds we know blow away."

Heartfelt thanks to the Drew Nursing Home and their staff who cared for John with such strength and compassion for many of his later years. He especially enjoyed the bingo calling by recently departed Bill Durant and the musical guest appearances. He was known to play his accordion any time day or night when the mood struck.

In lieu of flowers, John’s family kindly requests donations may be given to the Saint Bartholomew’s Catholic Church Cemetery Fund or to the charity to your choosing.