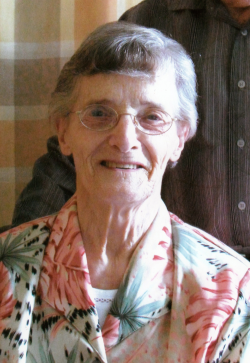 Edith Isabelle (Ellis) Scott, of Sackville, NB, and formerly of Baie Verte, passed away at the Drew Nursing Home on Thursday, May 12, 2022 at the age of 91.   Born Jan 17, 1931 in Bathurst, she was the youngest child of the late Alvin and Elizabeth (Scott) Ellis.

Prior to marriage Edith had worked at Marshlands Inn, Sackville, then was a stay-at-home mom until her girls were grown.  Later Edith became a valued 14 year member of the Jones Funeral Home staff performing her duties with perfection. She was a long time member of St. James United Church, Baie Verte, a choir member, sunday school teacher, faithful member of WMS and UCW, as well as a former member and president of Baie Verte Seniors Club.

Her skills in the kitchen were enviable and her bread and biscuits were in great demand.  She enjoyed card parties, quilting, knitting and spending time with her family.

Edith will be sadly missed by daughters, Betty (Bob) Hunsley of Amherst and Eleanor of Fredericton; grandchildren, Brianne (Andrew) Hunsley and Blake (Brent) Hunsley both of Dartmouth, NS, Christopher (Tamara) Bilensky, of New Maryland, NB and Mitchell Bilensky of Fredericton; great grandchildren, Fox and Thora Hart, and Brooklyn Bilensky; a sister-in-law, Jean, as well as several nieces and nephews.

Edith was the last surviving member of her immediate family.  Besides her parents, she was predeceased by her husband of 62 years, Burris Scott; her infant daughter, Esther, as well as her brothers, Melvin and Donald and her sister, Charlotte Wiseman.

Arrangements are under the care and guidance of Jones Funeral Homes, Sackville and Port Elgin, NB (506-364-1300).  Cremation has taken place.  A graveside service will be held at the Fernwood Cemetery at a later date to be announced.

Donations in memory of Edith may be made to the Drew Nursing Home.