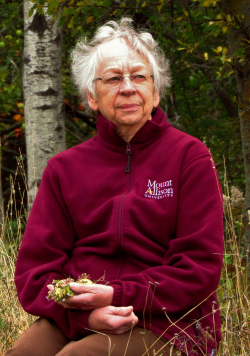 In the middle of a peaceful, starry-skied night, after a warm, sunny spring day and a brilliant sunset, at the end of Prairie crocus and Maritime mayflower season, Barbara Joan (Mornan) Bueckert died peacefully in the early hours of May 6, 2022 at Westford Nursing Home in Port Elgin, NB.  She was 89 years old.

Her loss is deeply felt by her daughter Dorothy (Dodie) Perkin and her husband John, her son Robert and his wife Donna, her four much-loved grandchildren, Wray Perkin (Kristyn Visser-Perkin), Joanna Perkin (Vincent Dubuc), Owen Bueckert, and Logan Bueckert, and her sister Ann Noble.  She also leaves behind her niece Heather Gray and nephew Richard Noble and their families, and many nieces and nephews from her husband’s family.

Her beloved husband Peter and her older sister Peggy preceded her in death.

Barbara was born and raised in Montréal.  She was proud of her family’s Baptist heritage as ministers and educators in Jamaica, and continued that heritage by marrying Peter, a Baptist minister.  When, at the age of 34, she and Peter and their children moved to southeast Saskatchewan, she fell passionately in love with the vast prairie sky.  They lived in many places across western Canada, and in retirement, moved to the Maritimes to be closer to their first two grandchildren, but no matter where they lived, the prairie was forever her spiritual home.

Barbara treated every home as if it was her permanent home, embracing each community and the people in them.  Her homes were places where family, friends, church folk, and strangers were always warmly welcomed.  In Sackville, she became "Nana" to countless university Chapel students and football players.

Birds and flowers were two of Barbara’s favourite things.  She spent hours working in her gardens, learning to adapt to different climates and soils.  She was an accomplished needlewoman and seamstress, sewing wedding dresses, tailored suits, and many outfits for her grandchildren.  She worked as a school librarian in several schools across Canada, and loved the opportunities that arose for connecting with the students, especially those who were marginalized.

Barbara was a multiple cancer survivor, but cancer never defined her.  She tackled each bout with determination, faith, and strength.  She believed that God was in control of her life.  From her, we learned to look for the beauty in the small things in life, the insects in the gardens, the wildflowers hiding in the woods, the way the clouds were striated in the sky, and the countless colour variations in wild lupins.

The last years of Barbara’s life were spent at Westford Nursing Home.  We are so grateful for the loving care that she received from every staff person, her visitor Carolyn, and her longtime family doctor, Graeme Stewart, especially since COVID limited the amount of time we could spend with her.

Barbara's funeral arrangements have been entrusted to Jones Funeral Home, 70 Bridge St., Sackville, NB (506-364-1300) where visiting hours will take place on Tuesday from 6 to 8 pm.  Her funeral service will be celebrated at Mount Allison University Chapel on Wednesday, May 11, 2022 at 2 pm, officiated by her son-in-law Rev. John Perkin.

Donations in her memory may be made to the Westford Foundation Serenity Garden or the Canadian Foodgrains Bank.

A video recording of the funeral service will be available here on Thursday, May 12, 2022.