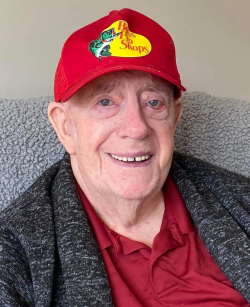 Service Information
Service Time
A mass for Dominic and Doris will take place in their hometown of Bathurst, NB at a later date.
Requested Charity
IWK Foundation
Send Flowers

It is with deep sadness we announce the passing of Dominic Joseph Power, age 86, of Sackville, NB.  Dominic passed away at the Drew Nursing Home, surrounded by his loving family on April 20, 2022.

Born in Mortier, NL, Dominic was the son of the late Nicholas and Mary Ann (Hartson) Power.

Dominic loved working with his hands, including having built a boat which he was very proud of.  He was a devoted family man who was very proud of his daughter and his beloved grandchildren.  He was an avid fisher and enjoyed spending social time with anyone he could.

Dominic will be dearly missed by his daughter, Nicole (Troy Wells) Lavigne, Sackville; his grandchildren, Cole (Elizabeth) Lavigne, Aiden Dugas, and Donovan Wells; his step-grandchildren, Marissa and Debra-Jane Wells; his sister, Catherine (John) Walsh, as well as by his special cousin, Sylvia (Mike) St. Croix, and several other very close cousins, nieces and nephews.  He will also be missed by many dear extended family members, including his brothers and sisters-in-law

Besides his parents, Dominic was predeceased by his wife, Doris (Vienneau); his grandson, Jimmy Lavigne.

The family would like to extend their appreciation to Dominic's "special nurses" at the Drew Nursing Home for their compassion and care during dad's stay.

Arrangements are under the care and guidance of the Jones Funeral Home, 70 Bridge Street, Sackville, NB (506-364-1300).  A mass for Dominic and Doris will take place in their hometown of Bathurst, NB at a later date to be announced.

Donations in memory of Dominic may be made to the IWK Foundation.

Sharing of memories and condolences may be sent to the family by visiting Dominic's online memorial at www.jonesfuneralhome.ca or through the Jones Funeral Home Facebook Page.