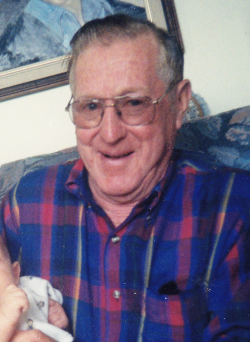 It is with great sadness that we announce the death of Joseph Camille Legere, 92, of Petit-Cap, NB.

Camille passed away at the Villa Providence, Shediac, on Tuesday, December 28, 2021.

Born in Petit-Cap, NB, Camille was a son of the late Josue and Delia (Arsenault) Legere.

Camille lived and worked in Toronto for 39 years, and retired to Petit Cap, NB, in 1991.  He enjoyed his Cadillac and would often wash it, wax it, take it for a drive and then return it to his garage until the next time.

He is survived by step son-in-law, Derrick Townsend, Guelph ON; his grandsons Robert Belyea and Paul Belyea, both of Ontario, and his granddaughter, Michelle Tucci of Nova Scotia, as well as numerous nieces and nephews.

Camille is the last surviving member of his immediate family. Besides his parents, he was predeceased by his wife Edna; his step-son John Despres; his step-daughter, Terry Muriel Belyea; as well as his siblings, Fred, Adolphe, Leo, Regina and Dorita.

Arrangements are under the care and supervision of Jones Funeral Home, 70 Bridge Street, Sackville, NB.  Cremation has taken place.  A service for Camille will be held at a later date to be announced.

Donations in memory of Camille may be made to the Villa Providence or a charity of the donor's choice.