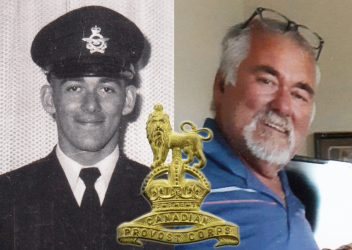 Daniel C. Estabrooks passed away on Tuesday, November 30, 2021, at the age of 68, at the Sackville Memorial Hospital with family by his side after a short illness with Lewy Body Dementia.  Danny was very appreciative of the M.A.I.D. Program in NB.

Born in Sackville, NB, he was a son of the late Carman and Charlotte (Hicks) Estabrooks.

Danny was a former prison guard at the Dorchester Penitentiary.  He was also a Corporal (Military Police) in Canadian Armed Forces.  After Danny's retirement, he started selling day old chicks and turkeys all over the Maritimes.  Danny and his wife Susan raised meat kings and turkeys also.  The name "Turkey Dan" stuck with him.  He was Past President of the Kinsmen Club in Sackville and Sergeant-at-Arms for the Royal Canadian Legion, Branch #26.  Danny was a strong Boston Bruins fan and proud to be one eh! Stephen!

In addition to his parents, he was predeceased by an infant sister Agnes and his first wife Monique.

Over the years Danny had many fur babies as a part of his family; Leah, Skittles, Whiskers, Smokey, Snickers, Opie, Jasper, Knuckles, Ivy, Wednesday and Elviira Olive.

Many thanks to Stephen and Cheryl for their compassion and care at this difficult time.  One of Danny's favorite things to do at Christmas time was to do last minute shopping on Christmas Eve and most stores were ready to close.  But, Danny was Danny after all, and as he would always say "CASE CLOSED!!

Arrangements are under the professional care and direction of Jones Funeral Home, 70 Bridge Street, Sackville, (506-364-1300).  In keeping with Danny's wishes, there will be no funeral or visitation.

If so desired donations may be made to the charity of your choice.

Sharing of memories may be made by visiting Danny's online memorial at www.jonesfuneralhome.ca or through the Jones Funeral Home Facebook Page.