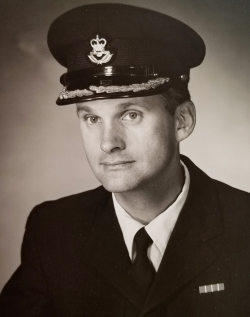 JOHN REGINALD LINES, "Jack":  Jack passed away peacefully in Moncton on October 19th, 2021 at the age of 87.  He will be deeply missed by his wife of 61 years, Helen (née Allen), his son Blake, daughter-in-law Valerie, daughter Stephanie, son-in-law Erich and grandchildren Kathryn, Brendan, Marlena, Alison, and Georgia.

Born in Mount Dennis in Toronto on December 30, 1933, he remembered delivering milk by horse carriage and later working in the market gardens at Jane and Eglinton Streets. Entering the Regular Officer Training Program, he received a degree in civil engineering from the University of Toronto in 1957 and began a career in the Royal Canadian Air Force that took him across Canada including his first posting surveying on Baffin Island.  In 1984, he retired at the rank of colonel and took his project management and construction skills to the Bank of Canada where he worked for the next six years managing their building portfolio.

He met Helen, the love of his life, while a Flying Officer stationed at Canadian Forces Station Moisie Quebec (near Sept-Iles).  She was a civilian primary school teacher and they were soon married at her parent’s home in Upper Cape, New Brunswick and began their life together.  She was his trusted advisor, confidant and travel companion.

After a career that took them many place across Canada, Jack and Helen retired to Helen’s family farm in Upper Cape, NB and welcomed family and friends for many wonderful summer vacations on the shores of Baie Verte.  In retirement they traveled, often with friends, and enjoyed seeing the world.  He especially enjoyed a tour of the battle fields of northern Europe which reflected his passion for history and politics.

Born during the depression, he always had a keen sense of community service and was grateful for what life had provided him.  Upon retiring to his adopted community in south east New Brunswick, he took on many volunteer activities spending several years on the board of the Westford Nursing Home, managing the renovation of the heritage Keillor House museum, being a lay preacher in his local United Church, and managing the finances of several local volunteer organizations.

Technology was not his first love, preferring the personal touch of the telephone to email and when public speaking he relied on hand-written notes.  He enjoyed mornings spent discussing politics and current events with friends over coffee and, as a consummate problem solver, he was quick to lend a helping hand or to offer advice.  Most of all he loved his family and was so proud of his children and each of his grandchildren and their accomplishments.  He will be greatly missed by those he has left behind.

Arrangements are under the care and guidance of Jones Funeral Home, 70 Bridge Street, Sackville, NB (506-364-1300).  A celebration of his life will be held on Friday, August 19, 2022 at 2 pm preceded by his visitation from noon until 2 pm.  Burial will follow in the Upper Cape Cemetery.

His family would like to thank the staff of the Westford Nursing Home and Moncton Hospital for compassionate care over the last year.

Sharing of memories and condolences may be sent to the family by visiting Jack's online memorial at www.jonesfuneralhome.ca or through the Jones Funeral Home Facebook Page.