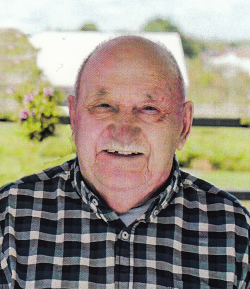 The death of Abner Beal, 91, of Sackville, occurred at the Drew Nursing Home on Friday, October 1, 2021.  Born in Midgic, Abner was a son of the late John and Luella (Estabrooks) Beal.

Abner will be dearly missed by his daughter, Elizabeth (Bill) Bonnell, of Brantford, ON; his son, Earl (Heather) Beal, of Sackville; son-in-law, Raymond Trueman, Truemanville, NS; nine grandchildren and twenty-one great grandchildren, all of whom meant the word to him; a sister, Daphna Day, NS; a brother Raymond, ON, as well as several nieces and nephews.

Besides his parents, he was predeceased by his wife of 68 years, Ruby; a son, Eric; a daughter, Barbara Ann Trueman, as well as eleven brothers and sisters.

The family would like to extend a special heartfelt thank you to the Drew Nursing Home for their compassionate care and for going above and beyond during his final days with him.

Arrangements are under the care and guidance of Jones Funeral Home, 70 Bridge Street, Sackville, NB (506-364-1300).  Honouring Abner's wishes, there is to be no visitation or funeral services at this time.  A graveside committal service will be held at a later date.

Donations in memory of Abner may be made to the Drew Nursing Home or a charity of the donor's choice.

Sharing of memories and condolences may be sent to the family by visiting the online memorial at www.jonesfuneralhome.ca or through the Jones Funeral Home Facebook.