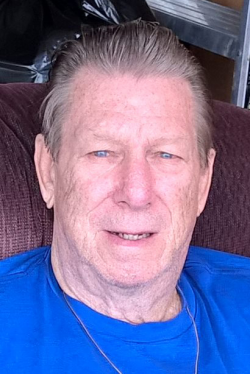 Requested Charity
Greater Moncton SPCA, the Alzheimer's Association of Canada or a charity of your choice.
Send Flowers

The family of Wayne Estabrooks is saddened to announce his passing on September 22, 2021 at the Salem Manor Nursing Home, Leduc, Alberta.

Wayne began his career in the military at age 18, originally joining the Navy.  He served for a period of three years before leaving to accept employment at the Dorchester Penitentiary as a Corrections Officer. He remained with Corrections Canada for one year, at which time he returned to the military to serve in the Air Force, entering as a  Private, with  eventual promotion to Sergeant.  He was assigned to the Mobile Support Equipment Operation Division as a transport driver.  He left the service after a total of 23 years. Thereafter he took employment with Economy Trucking as a long-haul driver, travelling throughout the U.S. and Canada, until his retirement at 65.

Most of Wayne’s adult life was spent in Alberta.  On visits home to Sackville he enjoyed getting together with family, as well as meeting long-time friends at the Canadian Legion, Branch #26, on Lorne Street to go over "old times."  A good game of "Scat" with family and friends was often on the agenda.  It was evident he should stay away from "Loss Vegas".  He also enjoyed a game of "Scrabble" with  Mum.  He soon found out he had met his match.  Wayne also looked forward to drives in the countryside, and no visit home was more important than a trip to his favourite, Rockport;  and Johnson’s Mills.

Wayne was very fond of animals, especially dogs.  He loved his dog "Dusty" with all his heart and soul.

Funeral arrangements are under the direction of Glenwood Funeral Home, Sherwood Park, Alberta.  Cremation has taken place.  There will be no visitation or funeral service.  His ashes will be shared with family members and a portion will be spread at the gravesite of his Mum and Dad in the Sackville Cemetery.

The family wishes to thank the staff of Baldwin Villa, Sherwood Park, for the excellent care provided to Wayne over the past number of years.  We would also like to thank Salem Manor Nursing Home for attention to his care more recently.

Sharing of memories and condolences may be sent to the family through the Jones Family Funeral Home facebook page.

In memory of Wayne, donations may be made to the Greater Moncton SPCA, the Alzheimer’s Association of Canada or a charity of your choice.