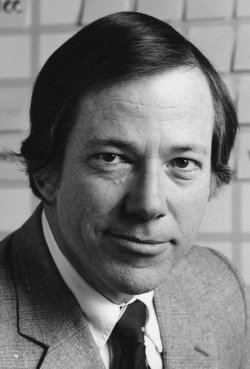 Of Toronto, and later Clarkson, Ontario.  He died peacefully at their residence, The Millwood in  Leaside, Toronto, at the age of 84.  Dear friend and husband of Jean for 60 years.  Proud father of Kerstin McCutcheon (Ryan) and Allen Flemington (Krista).  Bub to Jessica and Mark McCutcheon and Hannah and Sarah Flemington.  Peter was born in Toronto, the son of the late Jessie and Carl and brother of Shirley Tait (Don) of Ottawa.  He was a graduate of Forest Hill Collegiate, Mount Allison University, and the Annenberg School, University of Pennsylvania.  An alumnus of the BBC, long time broadcaster, film journalist, writer, producer, teacher, and a founder and programming head of Vision TV.  Peter was a keen advocate of diversity, in public media and for social justice here and abroad.

For many years he and Jean and the family were active members of Fairlawn Avenue United Church in North Toronto.  We believe he had a part in every committee and presented countless multimedia presentations during the service or after, reflecting the international journalism he was living.

Film journalist, producer and educator with decades of experience in human affairs broadcasting, Peter was a founder of Vision TV, the world’s first national, multifaith/multicultural television service.  He set the tone as Head of Programming and Development.  He loved encouraging independent film makers, revealing their regional issues to people from coast to coast.  Peter developed a number of series and was honoured with two Geminis, and was twice given the Gabriel Award for Network of the Year.  His archives are held at the Clara Thomas Library at York University.

After returning from his stint at the BBC in London, he contributed radio documentaries before moving into television as a producer for CTV’s award-winning Spectrum series (the first effort to marry religion, spirituality and public affairs). The CBC then began Man Alive - one of Canada’s longest-running series and for which Peter was the Executive Producer in the late 90s, winning the Wilbur Award.

He moved into documentary film making on international development issues.  Many of his films were honoured in Europe and the US and one was selected to open the first International Film Festival on the Environment.  He was a founder of the International Consortium of Independent Filmmakers specializing in development issues and, in later years, brought Vision into the One World Group - the only Canadian member.

Peter’s Master’s thesis (University of Pennsylvania ‘71) sparked a parallel interest in broadcast policy and led to interventions before the CRTC on various issues relating to the airwaves as a public trust.  He submitted a brief to the hearing on Religious Broadcasting, which led the Commission to call for applications.

Peter conducted field studies for an agency in Geneva on the potential of media to support development goals in Kenya and Ethiopia, taught the first seminar in media policy and responsibility at Concordia, and developed TVsCOPE, a curriculum designed to help people cope with the effects of television in their lives.

Peter and Jean both had roots in the Maritimes and in later years they spent increasing time in their beloved 1850s home on the Bay of Fundy in Nova Scotia, a place which thrives on the visitation of family and friends.  They restored the house a couple of times since saving it in 1964.

Peter was a strong advocate for diversity in all forms.  He was humble and was forever giving credit to others.

Sackville services have been entrusted to the Jones Funeral Home, Sackville and Port Elgin, NB (506-364-1300). A graveside service will take place Monday, August 16th at 11am in the Sackville Cemetery.

Donations in Peter's memory may be made to the Juvenile Diabetes Research Foundation, www.JDRF.ca.

Condolences, and sharing of memories may be sent to the family by visiting Peter’s online memorial at www.jonesfuneralhome.ca or through the Jones Funeral Home Facebook Page.