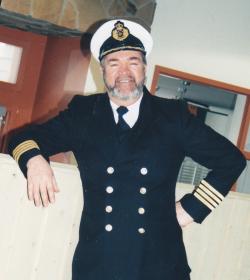 It is with deep sadness we announce the passing of Edward Carl Wells Allen, 69, of Malden, NB.  Edward  passed away comfortably surrounded by his loving family on Friday, July 2, 2021 at the Moncton Hospital, after an intense battle with Cancer.

Born in Sackville, NB, he was the son of the late Edwin "Ted" and Helen (Wall) Allen.

Edward worked for the CN/Marine Atlantic ferry service for many years where he worked his way up from Steward to Captain.  He then worked in Black's Harbour as the Captain of the Grand Manan.  He taught courses in navigation at Holland College and he worked on the Digby-Saint John ferry as well.

Edward, or Eddy, to his work friends, was known for his love of farming and gardening, his efforts with the Cape Jourimain Nature Center and his fondness for his grandchildren.  Edward's favorite things in the world were his grandchildren and working in his garden.  He always loved a good feed of new potatoes.  He loved music and shared his musical talents by playing the guitar and even writing a song about the Grand Manan.  He was widely known for his hard work ethic, fairness to those that worked with him and being a good friend and father.  Edward's faith was very important to him and he was a member of the St. Andrew's Presbyterian church in Sackville, NB.

He will be dearly missed by his wife of 51 years Terrlynn Ann (Pauley) Allen; children Jonathan, Craig (Rosalyn), Karie (Shannon) and Ryan (Melissa); grandchildren Edwin, Sadie, Elly, Riley, Avery and Macie; his sisters Wendy, Margaret (Alden), Carolyn, Velvet (Brian), and many nieces and nephews.  He was predeceased by his two sisters Della (Bryce) and Beverly and his niece Dana.

Arrangements have been entrusted to the Jones Funeral Home, Sackville and Port Elgin, NB (506-364-1300).  Public visitation will be held at Jones Funeral Home's Port Elgin facility, 3 West Main St. on Monday, July 5, 2021 from 6 to 8 pm.  A private funeral service will be held at Jones' on Tuesday, July 6, 2021 at 2 pm, Rev. Jeff Murray officiating.  The funeral will be available to watch online by 5 pm by visiting his obituary on the funeral home website.  Burial will follow in the Bayfield Cemetery.

Donations in memory of Edward may be made to the St. Andrew's Presbyterian Church, Sackville Memorial Hospital Palliative Care, Cape Jourmain Nature Center, or the Cape Tormentine Fire Department.

Condolences, and sharing of memories may be sent to the family by visiting Edward’s online memorial at www.jonesfuneralhome.ca or through the Jones Funeral Home Facebook Page.