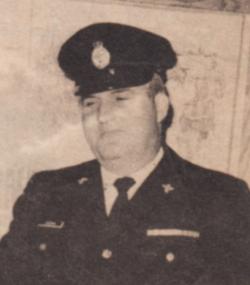 Service Information
Service Time
Honouring Oliver's wishes, cremation has taken place and there is to be no visitation or service at
Requested Charity
Charity of choice
Send Flowers

It is with broken hearts that we announce the passing of Oliver Amos Goodwin, 82, of Baie Verte, NB on Wednesday, June 30, 2021 at the Sackville Memorial Hospital.  Born in Coburg, Amos was a son of the late Roland and Margaret (Craig) Goodwin.

Amos served 30 years in the Canadian Armed Forces, retiring to Baie Verte, NB, with his wife to begin a Hobby Farm that turned to another 20 plus years as a much-enjoyed second full-time career.

He worked many extra jobs and hours to provide his family with Christmas presents, both purchased and hand crafted.  The gifts he made were always better than the store bought.

Amos was a man of many talents, including renovating houses, building barns and fixing machinery.  The list of his accomplishments are too many to include.  He was a Jack of all trades, and a master of many.

Amos will be dearly missed by his wife, Verne (nee Doolittle), Baie Verte, with whom he was able to celebrate their 60th Wedding Anniversary together this past March.  In addition, he will be missed by his children, Kevin (Susan) Goodwin, Pickering, ON, Kathleen Goodwin, Riverbank South, NB, and Kim (Bill Quinn) Goodwin, Baie Verte, NB, as well as his former daughter-in-law, Glenis; his grandchildren, Ian Kay, Emily, Kayla, Tim, Nicholas, Victor, and Victoria Goodwin; a sister, Dora Nadeau, Saint-Basile, NB; a sister-in-law, Doreen Atkinson, Kingston, ON, as well as several nieces and nephews.

Besides his parents, Amos was predeceased by his son, Jeffrey and Kenneth; his brothers, Ralph, Lovell, George and Kenny Goodwin, as well as sisters, Lottie Pye, and Edna Goodwin and a granddaughter in infancy, Kathleen Marie Goodwin-Lake.

Arrangements are under the care and guidance of Jones Funeral Home, 70 Bridge Street, Sackville (506-364-1300).  Honouring Amos' wishes, cremation has taken place and there is to be no visitation or service at this time.

Donations in memory of Amos maybe made to a charity of the donor's choice.

"We will miss you very much."