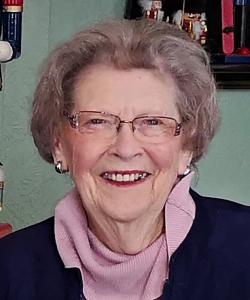 Alice was born in Roachville, New Brunswick to the late Raleigh and Fannie Louise (Tays) McFarlane.

Alice married Dr. Graham Adams in 1969. During their married years Alice enjoyed traveling with Graham as he took study sabbaticals and particularly when they traveled to New York city to visit Graham's mother.

After the death of her father a few days after Alice and Graham were married, Alice's mother came and kept house for them for several years.

After retirement, 1994 was their first winter in Florida, where they made many friends and had so much fun with cousins Betty and Betty Anne.  Their retirement years saw she and Graham traveling to Italy, France, England, Scotland, and Ireland where they loved exploring the history of these various cultures.  They returned to Florida each winter until Graham died on valentines day 2006. Alice loved to shop, eat out and play bridge ---- and in that order!!  Cherish the memories!

Alice belonged to the  Sackville "once in a while club" where she made presentations on history from the Sussex area including Princess Louise, a horse rescued by Canadian solders during World War 1 and also on the Historic Londonderry church which her father’s family attended.  She belonged to the Sackville Duplicate Bridge Club and played bridge regularly with her close circle of friends.  She was an active volunteer with the Sackville Memorial Hospital Auxiliary for many years.

Alice is survived by close cousins Ron and Carlene Patterson of Amherst, Doug and Betty Stewart and Mary Lawson of Sussex, Betty Anne Hoyt of Quispamsis, Myrna Richards and George Tays of Hampton along with many close friends in the Sackville area.

Arrangements are under the care and supervision of Jones Funeral Home, Sackville, NB  (506-364-1300).  Due to current health concerns and to honor Alice’s wishes a private graveside service will take place in Kirk Hill Cemetery, Sussex, when conditions allow.

Rest in peace Alice, you lived a full life.

Memorial Donations to the Sackville Memorial Hospital Auxillary or to Knox United Church in Markhamville would be appreciated.