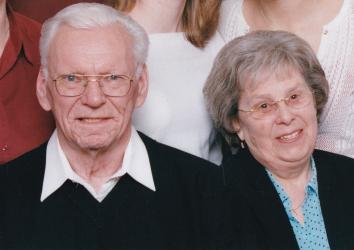 Margaret Sheila Kastuk (nee Thompson) of Royal Court, Riverview, NB and formerly of Dieppe, NB and Montreal – widow, mother, grandmother and great-grandmother passed away quietly in her 88th year at Moncton Hospital with her daughter Susan at her side on the 9th of May at 3:36am. She died, at peace, after coping with many chronic conditions.

With her passing, Margaret was reunited with her beloved husband of 61 years, John J. Kastuk who passed away in 2013.

She leaves behind a daughter, Susan Kastuk-Ridlington (Steve Ridlington), Sackville, NB; a son, Donald Kastuk (and Kristin); 2 beloved grand-daughters and their husbands– Emily & Darren Prashad – Ottawa, ON and Julie & Morgan Perrin – Whistler, BC and their one-month-old Lyla Hope – a great-grand-daughter. Sadly, John never got to meet his grandsons-in-law and great-grand-daughter.

Margaret and John were both native Montrealers. Except for a short 3 years in Ontario from 1957 to 1960, they raised their family in Verdun, PQ. They downsized to Brossard, PQ for 14 years ending in 1996 when moved to Dieppe, NB to be closer to "the girls".

Margaret had a career in women’s wear retail at the flagship Eaton’s store on Ste. Catherine Street in downtown Montreal. Her grand-daughters never lacked for the latest of outfits in childhood. She was a life-long fashionista.

She kept her home spotless, often hosted family events and was renowned for her Christmas baking and wonderful pies – a gift of skills warmly passed on to her offspring.

John Joseph Kastuk – husband, father, grandfather and salesman extraordinaire passed away in his 82nd year at home surrounded by his loving family at 3:50pm on 23 February, 2013. He died, at peace, after a lengthy battle with cancer.

John retired in 1995 after more than 40 years in sales in the industrial electrical sector with Wesco Canada – a division of Westinghouse Canada. He was well known in the electrical and construction industry in Montreal, the province of Quebec and, indeed, Eastern Canada.

John, a polio survivor from his childhood, was a model of courage and integrity in the pursuit of a full and active life. He was a pillar of strength in his commitment to his extended family and was a guide and resource for all through the family’s ups and downs. There was no greater cheerleader in celebrating the life milestones of his loved ones.

John was an avid fan of the Canadiens and Alouettes. There was no greater fan of his son Donald’s hockey pursuits or the soccer and volleyball exploits of grand-daughters - Emily and Julie. His love of smoked meat from "the Main" and a good Lafleur "steamie" hot dog were well-known. His skills at the barbecue grill were legendary.

After moving to Dieppe, John took an active role in the community as a board member of the Champlain Condo Association, volunteer with St Bernard’s Church Finance Committee and the computer centre of the MacDonald Centre for Independent Living. He also was a strong support to his daughter Susan with her evolving business.

John and Margaret very much enjoyed travelling by car, especially family camping adventures in New York’s Adirondacks in their children’s youth and then southern escapes, in retirement, from Canada’s wintry grasp.

John and his car were inseparable, he would drive Margaret anywhere. He would patiently sit in his car for hours waiting for Margaret to do her favorite activity, "shop ‘til you drop".

Special thanks are extended to all the Royal Court staff who became Margaret’s best friends for the past three years.

There will be no formal funeral or memorial service.

Arrangements are under the direction and care of Jones Funeral Home, Sackville, NB.