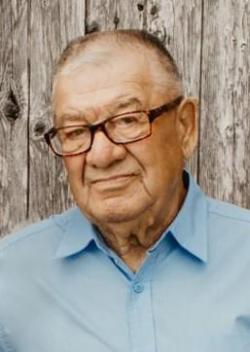 It is with heavy hearts that the family of Vincent R. Chappell (Vin) announce his passing at the Sackville Memorial Hospital on February 6, 2021 at the age of 92.

Born in Baie Verte, NB, Vincent was the son of the late Ray and Juanita Chappell.  Vin was formerly employed with Atlantic Industries until his retirement.

Vin spent almost the last decade living on his own in his cottage with lots of family around.  Always cooking for everyone and mowing the football size yard twice a week.  His claim to fame was his selective hearing; never "hearing" what he needed to, only what he wanted to.  His love of shopping and all things food, his inability to hide his favoritism for Sam and more recently baby Vinny.

Besides his parents, Vincent was predeceased by his wife, Launa; brothers, Lloyd and Garnet; his son, Terry; his son in law, Brian Tower, and great granddaughter, Willow Campbell.

Arrangements are under the care and guidance of Jones Funeral Home, 70 Bridge Street, Sackville, NB (506-364-1300).  At Vincent's request, there will be no visitation or funeral service.  A private family memorial will be held at a later date.

Sharing of memories and condolences may be sent to the family by visiting Vincent's online memorial at www.jonesfuneralhome.ca or through the Jones Funeral Home Facebook Page.