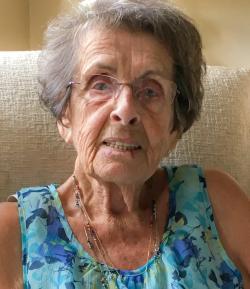 It is with great sadness that we announce the death of Marie Rita Aline Legere, 93, of Sackville, NB, at her home on Sunday December 06, 2020.  Born in Campbellton, NB, Aline was the daughter of the late Ernest and Clara (Imhoff) Renault.

Born and raised in Campbellton, NB, Aline graduated from boarding school in Tracadie, NB, before studying nursing at the Hotel Dieu Hospital Campbellton, NB, and graduating with a Public Nursing degree from Dalhousie University, Halifax, NS, in 1950.  She married Valery Legere of Sackville, NB, in October 1952 and shared 26 years of his military career which took them across Canada as well as El Paso, Texas, USA and Shrivenham, England.

Her passions included choir singing, travelling most continents of the world with the highlight being Tokyo, golfing, playing scrabble, cross stitching, knitting, sewing as well as time at the family cottage at Amherst Shore, NS.  As a young, independent minded woman she learned to drive and took pride in driving the Renault Brother’s Hardware store truck on deliveries in Campbellton, NB.  Aline was a devoted wife, active community supporter, and volunteered much of her time to various catholic parish works as well as Meals on Wheels for residents of Sackville, NB.

Besides her parents, she was predeceased by her husband of 66 years and son Marc; a brother Henry and four sisters Cecille Renault, Andrea Mazerolle, Estelle Forest and Gilberte Arsenault.

Arrangements are under the care and supervision of Jones Funeral Home, 70 Bridge Street, Sackville, NB (506-364-1300). Aline's Funeral Mass will be celebrated from St. Vincent's Roman Catholic Church on Thursday, December 10, 2020 at 10:30 am, Father Charles Broderick officiating.  Burial will follow in the Sackville Cemetery.  Masks are required, and we ask that you respect Social Distancing.

Donations in memory of Aline may be made to the Canadian Cancer Society.

To share memories of Aline, or to send condolences to the family, please visit Aline's online memorial at www.jonesfuneralhome.ca or through the Jones Funeral Home Facebook Page.