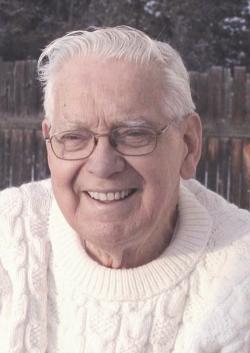 Charlie was born in Lower Sackville, NS to Percy and Grace (Peveril) Harpell, one of 11 children.

He attended school in Lower Sackville and was employed by Simpson's and later Sears as a clerk then a flooring salesman.  He met and married the love of his life Dorothy Bonnyman in 1954, and they moved to Tatamagouche to care for Dorothy's father and run the farm.  They started a family and raised 4 children, instilling the love of travel and adventure in all of them.

In 1968 Charlie went to Dartmouth Trade School and learned the Upholstery and Furniture Refinishing Trade.  He opened Northumberland Upholstery in 1968 and operated until 1996.  Always up for a challenge they moved to Lethbridge Alberta in 1981 to 1983 to be family and experience the western culture.  Never sitting still for long they traveled throughout Canada and the US coming home with many stories.  After they retired in 1996 they again followed the family and ventured west to Cranbrook and settled in Wycliffe, BC.  They loved the hikes in the "Pine Woods" with the dogs and all that the area had to offer.  Picnics were a family constant, and camping in a tent until they were in their 80th year!

Many hours were spent at the table putting together jigsaw puzzles, the bigger the better.  Charlie was an amazing knitter and knit until he was 82.  His family still have many sweaters and keepsakes.  Charlie and Dot always had pets and the hardest part of their stay in the Nursing Home was that they didn't have a cat or dog to love.

Charles loved music and sang in choirs and musicals in Tatamagouche and Cranbrook, he spent a lifetime listening to music and in earlier years dancing.  Charlie and Dot moved to Little Shemogue, NB in 2013 and resided with their daughter, Charlie moved to the Westford Nursing Home in 2015 and Dot joined him in 2019.

In addition to his parents, he was predeceased by brothers William and Arthur; sisters Jenny, Rosa, Netta, Nola, Helen and Gertrude.

Arrangements have been entrusted to Jones Funeral Home, Sackville & Port Elgin, NB (506-364-1300).  Cremation has taken place and there will be no service by request.  A family graveside service will take place at a later date in Tatamagouche, NS.

Those wishing to make a donation in Charlie's memory may do so to the SPCA, or the charity of your choice.

Sharing of memories and condolences may be sent to the family by visiting Charlie's online memorial at www.jonesfuneralhome.ca or through the Jones Funeral Home Facebook Page.