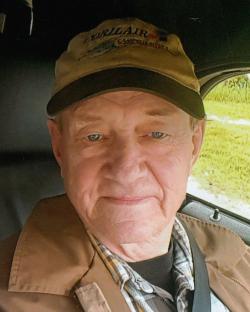 It is with heavy hearts that we announce the passing of Warren Folkins, 69, at his home in Middleton, NB, with his loving family by his side.  Warren passed away on Friday, October 30, 2020, after a courageous battle with cancer. Born in Sussex, NB, he was the son of the late Ronald & Estella (Carson) Folkins.

Warren's hard working nature has lent skill and talent to carpentry, mechanics, and endless building projects. His physical strength, strength of character and steadfast support have been such a blessing to his family. There was always an endless parade of people at his shop door looking to borrow something or seeking advice, which often led to lengthy conversations on various subjects, which Warren always enjoyed.

Warren had a passion for his family, being in the woods, traveling, and music. His favourite saying was "Do things the easy way, not the hard way."

The family would like to extend their gratitude to the Oncology Department of the Moncton Hospital for their care and compassion, as well as for the exceptional care shown to Warren by Extra-Mural Services, Sackville.

Besides his parents, he was predeceased by his grandson Taylor.

Arrangements are under the care and guidance of Jones Funeral Home, 70 Bridge Street, Sackville, NB (506-364-1300). Honouring Warren's wishes, cremation has taken place. A private graveside service will be held at the Wesley United Church Cemetery in Berwick, NB.

Donations can be made in Warren's memory to the Canadian Cancer Society or the Wesley United Church, Berwick, NB.

Sharing of memories and condolences may be sent to the family by visiting Warren's online memorial at www.jonesfuneralhome.ca or through the Jones Funeral Home Facebook Page.