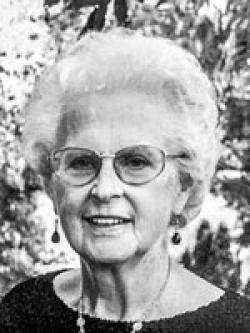 Born in Wood Point in 1922, Alice was the second of three daughters born to Sidney and Vera Barnes. Two brothers would follow. Ernest Barnes is here with us today, but her siblings - Helen, Mary and Roy predeceased her. Alice moved to Ontario in 2010 to be closer to her son Gregor Read and daughter Janice Miller. Her youngest child, Robert, was buried here in 1991.  Also buried here in 1999 is her husband Herbert.

Janice and Bob had plans to bring Alice’s ashes home for committal this summer and spend a few weeks here as they have done for the past several summers but Covid 19 restrictions have prevented them from being here today. Their daughters and families had hoped to be here as well but Leslie, husband Ross and son Gage and Stacey, husband John and daughters Jillian and Natalie are also still at home in Ontario. Also absent are Gregor, his wife Susannah and daughter Allison and her husband Trent.

So, let me tell you a little about Alice. She grew up on a farm just down the road from here. Her father delivered the mail, collected the taxes and was the school board trustee responsible for the hiring of teachers for the one room school. When it was time for high school, he drove Helen and Alice by horse and wagon into Sackville where they boarded for the week and dined on food their mother had sent with them. At the age of sixteen she graduated from Sackville High with a 93.8% average and gave the Valedictory speech to the thirty two students , the largest class ever at the time, in that Grade 11 class. She saved it all these years and Janice says it is terrific.

A year later, she and Helen graduated from from the Secretarial course at Mount Allison Academy and Commercial College. Again, Alice delivered the Valedictory address. The story is that both she and Helen applied for the secretarial position at Marshlands Inn and Mr. Read chose Alice. So she was on her own at the age of seventeen. According to Ludger Throop , she lived in an apartment across the street in what was known as the Bates house. It was at Marshlands that she met the son of the owners - Herbert.

They were married on September 26, 1942. They lived for awhile in Stonehaven. The Reads had been in the stone business since the early 1800’s with quarries at Wood Point and Wallace producing building stone, those at Beaumont, Taylorville and Quarryville producing pulp stone and at Rockport, Ragged Reef, Lower Cove and Stonehaven - grindstones. The rosy-hued stone in Toronto’s old City Hall and in Queen’s Park came from their Wood Point quarries. Although the Read Stone Company was sold in 1935 when the Reads returned to Sackville to open their home as Marshlands Inn, Herb continued to be associated with the business. Also an insurance salesman, the family lived in Bathurst until 1952 when they went west to North Vancouver.

They eventually built a house in Forest Hills about a mile below the Grouse Mountain chairlift. They were founding members of the Capilano Curling Club where they both became skips because they had had "some experience" with the game! In 1958 they returned to the Maritimes and resided in Moncton. Again, as founding members of Mount Royal United Church, a project to help with the building fund involved the making of Christmas puddings beginning in 1961. Alice had been given permission from her UCW group out west to take the "secret recipe" to the east with the stipulation that it "did not go all over the Maritimes"! That project continued for 14 years until 1973. However, Alice and Herb left Moncton in 1965 to take over the operation of Marshlands and since Alice knew the recipe by heart many were made and served at the Inn once the dining room was open for lunch and dinner again.

The Inn was famous for its ‘down home’ food and has been mentioned in "Where to Eat in Canada", the "Homemaker’s" magazine, "Back Roads and Country Inns" and "The New York Times" among others. When Queen Elizabeth toured New Brunswick in the mid eighties, Marshlands was chosen as one of the rest stops for her entourage. Alice, finding the Queen alone in one of the living rooms, enjoyed a brief conversation with her. When asked what they spoke about, she replied "oh, you know, the usual - the weather, the children and the like".

Alice and Herb retired in the late eighties and eventually sold the Inn. They were Life Members of the New Brunswick Hospitality Association. Alice was a member of I.O.D.E., a Life Member of the Sackville Memorial Hospital Auxiliary where she served as Treasurer for many years. And last but certainly not least, she was a Life Member of the United Church Women.

Hers was a life of hard work and service to others. Quoting from her Valedictory address, "The road ahead beckons us on. It will not be easy - we would not have it so - but it will be interesting. There are other lessons to be learned besides Math, Science and Languages - we must learn to face injustices, to prepare ourselves for surprises and shocks, to close our eyes to all that is not high and noble."

Cremation has taken place. Under the care of Jones Funeral Home, 70 Bridge St, Sackville, NB (506-364-1300) a graveside service will take place in the Westcock Cemetery on Saturday, August 22, 2020 at 10 AM, Rev. Lloyd Bruce officiating.  All are welcome to attend, while following COVID-19 restrictions.