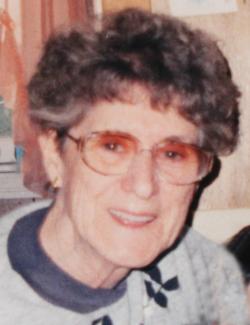 The death of Marie LeBlanc of Port Elgin, NB occurred at Westford Nursing Home in Port Elgin on Saturday, July 11, 2020.

Born in Richibucto Village in 1922, she was a daughter of Amedee and Bella (Thibodeau) Mazerolle. Leaving school at 16 she began working as a waitress, a job she loved. During WWII she moved to Saint John where she worked and met many new friends. In 1950 she came to Port Elgin and soon after met Adelore LeBlanc and the two were married the next year. The couple went on to have four children, including two girls who died in infancy. Dedicated to her faith Marie was a long-time member of St. Clement's Roman Catholic Church, playing an active role in all aspects of church life. She had a wide circle of friends both near and far.

A devoted mother and grandmother, she also enjoyed sewing, reading, watching TV, listening to music and most of all, being with her family and friends. Besides her parents, Marie was predeceased by her husband Adelore in 1974, daughters Marlene in 1952 and Gail in 1959; brothers Gerry and David and sisters Aurore and Leonie; brother-in-law Eddie LeBlanc and sisters-in-law Marjorie Cormier and Isabelle Larsen.

Arrangements are under the direction of Jones Funeral Home, Sackville & Port Elgin (506-364-1300). Cremation has taken place. A memorial service will be held for Marie at the Jones Funeral Centre in Port Elgin on July 20 at 2 pm.  Due to COVID-19 restrictions, the service will be by invitation only but will be broadcast to Marie's obituary on the funeral home website and will be ready for viewing later in the day.

Sharing of memories and condolences may be sent to the family by visiting Marie’s online memorial at www.jonesfuneralhome.ca or through the Jones Funeral Home Facebook Page.