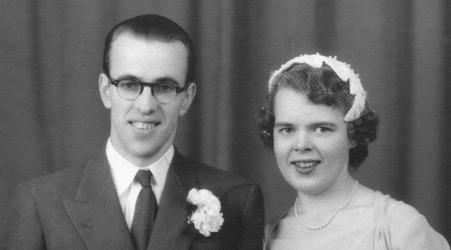 Elmer Melvin Tory died unexpectedly at the age of 91. He was born in Vermilion Alberta on December 10, 1928 and spent the first years of his life on a farm north of Wainwright. The family moved to Wainwright where he obtained his elementary and high-school education. A high-school yearbook described him as the small boy with the huge brain.

He attended the University of Alberta, graduating with first-class honors in Chemistry. He won three honor prizes and the Scholarship of the Council of Jewish Women for the highest average in first-year Arts and Science. An I.O.D.E. Coronation Bursary paid almost all of his tuition for three years. Additional funds came from summer jobs and part-time work as a laboratory demonstrator.

For the rest of his life, he was associated with the Department of Mathematics and Computer Science at Mount Allison University (Associate Professor 1965-73, Professor 1973-90, O. E. Smith Professor 1990-95, Professor Emeritus 1995-2020). Though he appreciated his contacts with students, his great passion was research. From his initial effort (published in the ATA Magazine when he was 17) to a jointly authored paper in his 87th year, he applied mathematics to explain natural phenomena. These included the propagation of concentration gradients in sedimenting suspensions, the nature of settling in compression, a Markov model for sedimentation, and random packing of circles, squares, and spheres. Especially notable are Tory plots, the Pickard-Tory process, and the Jodrey-Tory algorithm. The latter, published in 1985, is still a standard method for simulating dense random packing of spheres. He gave the Blundon Lecture at Atlantic Math Days in 1993.

Despite the demands of teaching, research, and studies, he participated in many other activities. He was editor of the high-school yearbook and class valedictorian. He enjoyed duplicate bridge and despite several long absences from the game, he achieved the rank of Bronze Life Master. He liked to play pool and had a full-size snooker table in his basement.

He was a lifelong supporter of the CCF-NDP and helped out in various capacities in many elections. He also championed many causes with letters to the editor. He contributed generously to local, national, and international charities. While teaching at McMaster University, he was on the executive of the Unitarian Church in Hamilton. At Mount Allison he served on many committees, including the Library Planning Committee, the Tenure and Promotion Committee, and the Joint Liaison Committee. He chaired the committee that produced the ‘Tory Report’. He was President of the Federation of New Brunswick Faculty Associations (FNBFA), twice President of the Mount Allison Faculty Association, and twice Chief Negotiator for MAFA. In recognition of these services and his academic stature, he was awarded the Prix Nicole Raymond Award in 1995.

He was predeceased by his wife Audrey, sisters Marjorie Tory and Lucile Peacock, brothers Alan and Cecil, and daughter Heather Austin. He is survived by his son Kevin (Christine), grandsons Pavel and Michael, and several nieces and nephews

An informal time of remembrance will be held at a later date. Donations in memory of Dr. Tory may be made to Live Bait Theatre or Doctors Without Borders at https://bit.ly/3dndHDy

Arrangements are under the care and supervision of Jones Funeral Home, 70 Bridge Street, Sackville, NB (506-364-1300).  Condolences may be submitted to the family by visiting their website at www.jonesfuneralhome.ca

Note from Elmer’s son: Dad wrote this himself some years ago, and only the dates have been updated.