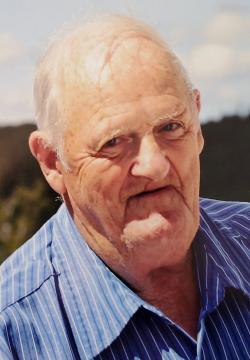 It is with great sadness that we announce the death of George King Fillmore, 87, of Dorchester Cape at the Moncton Hospital. George passed away on Wednesday, May 20, 2020 after a brief illness.

George came from humble beginnings. He was a kind man who loved to help anyone. He enjoyed to socialize and be around the company of others.

George was predeceased by his first wife, Roma (Cormier), his second wife, Jeannie (Cormier) by his son, Jeffrey.

Arrangements are under the care and supervision of Jones Funeral Home, 70 Bridge Street, Sackville (506-364-1300).  A time of public visitation for George and Jeannie will be held at the funeral home on Friday, June 5, 2020 from 6-8 pm. A funeral service will follow on Saturday at 11 am at the funeral Home with interment to be held at the St. Edward's Cemetery in Dorchester.

Donations in memory of George may be made to the Heart & Stroke Foundation.

Sharing of memories and condolences may be sent to the family by visiting George's online memorial at www.jonesfuneralhome.ca or through the Jones Funeral Home Facebook Page.