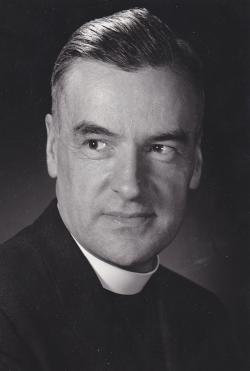 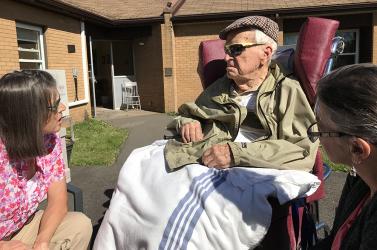 Our Dad, Gordon, died on Saturday, May 9, in the wonderful care of the

Nursing Staff at the Gables Lodge in Amherst, Nova Scotia. His last months were graced additionally, by the presence of three angels, Joann, Betty and Carolyne who attended him constantly, when family could not.

He lived a long and worthy life, beginning almost a century ago in Montreal, where he was born to William and Mary, recent immigrants from Belfast in the North of Ireland. He had a sister, Marie, older than Dad, who died as a High School teacher in Montreal, at a young age. We never really knew her.

Dad was not blessed with Marie’s artistic skill, nor with William’s athleticism (although he was unparalleled at his slow, methodical breast-stroke). However, he was a scholar and intellect. We used to joke about his penchant for wearing a toque, even to bed, as a means of keeping the neurons warm and humming.

He was educated at Westmount High School and thence on to McGill University. His studies were interrupted in 1942 when he shipped overseas during WWII, enlisting with the Corps of Canadian Firefighters, stationed in Plymouth, England. He also served in the Friends Ambulance Unit from 1944 until his return to Canada in 1946.

After returning to McGill, Dad had the incredible good fortune to meet our Mom, Florence Trotter, a pretty red-head and English and Classics student on scholarship from small-town Alberta. They were made for each other – the perfect match! They were married in August 1947.

Mom and Dad Moved to Conway, Ontario from where Dad studied Divinity at Queens AND served a five-point rural charge, his first United Church ministry. From there, service to the church became Gordon’s life’s work, Florence his constant companion.

In 1956 Gordon answered a call from the new congregation of Northlea United church in Laval to be their first minister. By the time we left Laval for Toronto, in 1964, there were four children and somehow, amid the chaos, we were nurtured.

In Toronto, Dad was the Associate Secretary for Evangelism and Social Service at the United Church headquarters. He traveled a lot, including to the Maritimes – he seemed to like it here.

Gordon was always curious. He read, read, then read some more. He digested Scientific American cover to cover. There were walls of books in all his houses. He installed the Encyclopaedia Britannica next to the dinner table – books and debate were de rigor at meals.

When the family traveled, Gordon always tried to find a bracket fungus to inscribe and memorialize the event. He favoured hikes. He picked up rocks and told us the stories they tell. He was an accomplished carpenter and projects bloomed at each residence in his life’s journey. He taught us how to use tools.

Dad attended two World Fairs – New York in 1939 with his sister Marie and Expo in 1967 with the whole gaggle of us in tow.

In 1971 we all headed to Sackville (except for his eldest, our sister Moira, for whom the allures of continuing in Toronto were too much, so she stayed there). The rest of us tried to adjust to small-town life in the Maritimes: it was a change from TO. Dad served for ten years at the Sackville United Church. He still gave the best sermons in the country; thoughtful, mysterious, never sanctimonious or threatening. He was the antithesis of the Hellfire and brimstone preacher, thank goodness! He was a master of the Children’s Story. They were enthralling, usually embellished with models he had built, or fossils he had collected. The adults often exclaimed that these stories were the most enlightening and entertaining parts of the service.

Our house in Sackville was never dull. We housed in sequence, and sometimes for years at a time, a stream of locals from broken homes, or transients, hitchhiking through on the TCH and looking for seasonal jobs, and who honed in on the manse adjacent to the big white church at the centre of town. We knew some by name, and they would reappear with the changing seasons.

From Sackville, in 1981, Dad and Mom moved to Merigomish, Nova Scotia, serving the church in a "quaint" two-point rural charge. The children by this point were at all points of the compass, where we remain to this day. Our Mom, Dad’s precious "Rusty" died there of a cancer which had stalked her for a decade.

Dad retired in 1986, moving to Dartmouth, Nova Scotia, where, true-to-form, he immediately set about filling in at local churches in need of leadership (which begs the question – is the term "Retired United Church Minister" actually an oxymoron?)

In Dartmouth, as during other parts of his life Dad was deeply involved in local Social Justice issues, including helping with the immigration files of the Filipino seamen caught in Halifax on the Maersk Dubai. He also organized and walked a 25 mile marathon in a project he called the "Walk of Witness", from Halifax to Lawrencetown, on his arthritic ankles. He indulged his lifelong interest in rocks and minerals by taking Geology courses at Dalhousie University.

In 1990 he married his second wife, the former Evelyn Crook, his steady companion until the last of his days. She was a twinkly-eyed Dartmouth girl and a retired Head Nurse and joined Dad in retirement travels to Australia and New Zealand, Alaska and Europe, and especially to the UK where Dad’s first clutch of grandchildren still reside. Evelyn, of course, had to share their apartment with Dad’s collection of minerals, rocks and fossils, all catalogued, labeled and displayed in purpose-built cabinets.

In his declining years, Dad was slowed by arthritis, declining eyesight and poor hearing. And finally, his intellect diminished as well. Both he and Evelyn moved into care. But to the end Gordon was a man of interest, listening with attention to world news and issues of the day, eager to learn about family, quick to inquire about anything and everything.

He lived a long life: at age 99 and despite never playing a shift of hockey, he ended up sharing at least a number with Wayne Gretzky.

He is survived by his wife Evelyn who still resides at the Gables Nursing Home in Amherst, and by his four children. He was thankful for 11 grandchildren and two great grandchildren.

He was man who tenaciously tried to do the right thing.

Dad has been cremated under the care and supervision of Jones Funeral Home, Sackville, NB (506-364-1300). Arrangements are being made for later burial. We are grateful to Jones Funeral Home in Sackville. In the era of Covid, no public Celebration of Life will be held in the near future, but reminisces will be welcomed through the Jones Funeral home website at www.jonesfuneralhome.ca or throught the funeral home's Facebook page.

Donations in Dad’s memory can be made through the Funeral Home’s website, or directly, to The United Church of Canada Mission and Service Fund or to the Stephen Lewis Foundation.