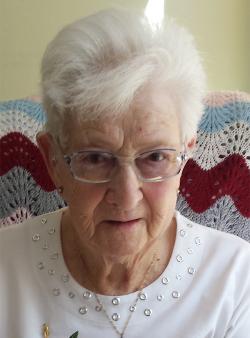 Born in Rusthall, Royal Tunbridge Wells, Kent, England to the late Edward R Sefton and the late Ethel A Ford, Betty was an English War Bride who moved to Canada after the Second World War, along with many other women who fell in love with Canadian servicemen. She made her home with her beloved Ted on Squire Street where she lived until Ted’s death in 2015.

Betty will be remembered for her fantastic skills at knitting, her home cooking, her quick wit, great sense of humour and fun, her love of gardening and nature especially her pet dogs and birds.

Arrangements have been entrusted to Jones Funeral Home, 70 Bridge St., Sackville, NB (506-364-1300).  As per Betty’s request, cremation has taken place with internment in the Sackville Cemetery in the spring.

Donations in Betty’s memory can be made to St Ann’s Anglican Church, British Settlement, The Drew Nursing Home or a charity of your choice.

Thanks to the staff at the Drew Nursing Home for her care over the last two years. Thank you to Father O’Brien for her spiritual care.

The family invites you to sign the online book of condolences at www.jonesfuneralhome.ca or through the Jones Funeral Home Facebook Page.