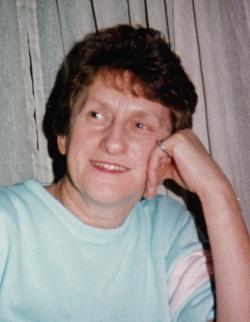 It is with deep sadness that we announce the passing of Doreen Thelma Fisher, age 85, of Moncton.  Doreen passed away, surrounded by her loving family, on Tuesday, December 3, 2019 at the Kenneth E. Spencer Memorial Home.

Born in Cape Tormentine, NB, she was a daughter of the late Marven and Leota (Pauley) Wall.

She was a former member of the Cape Tormentine United Church. Many will remember her as the lady who sold them an admission ticket to skating, hockey games and baseball games in Moncton. A job she did for many years and truly enjoyed.

Arrangements have been entrusted to Jones Funeral Home, Sackville and Port Elgin (506-364-1300).  An afternoon of remembrance held at Joneses in Port Elgin will be announced in the spring.

Those wishing to make a donation in Doreen's memory may do so to the Alzheimer's Society, the Heart and Stroke Foundation, or the charity of your choice.

Condolences may be sent to the family by visiting Doreen's online memorial at www.jonesfuneralhome.ca or through the Funeral Home Facebook Page.