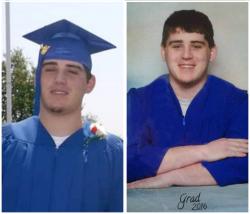 It is with incredible sadness that we announce the  tragic passing of Stephen Russell Sears, 20, of Murray Corner, and formerly of Alberta and Point de Bute, NB, at his home on Wednesday, October 2, 2019.  Born in Moncton, Stephen is a son of Lisa Oickle and Donny Sears.

Stephen was night supervisor with Tim Horton's in Cap-Pele, NB and was a member of the Bayfield-Cape Tormentine Fire Department.  He enjoyed gaming, drawing and fishing, in addition to getting tattoos.  He was a devoted family man who enjoyed spending time with his wife and baby-boy.

Stephen was predeceased by an infant brother, Coleman.

Arrangements are under the care and guidance of Jones Funeral Home, 70 Bridge Street, Sackville (506-364-1300) from where a funeral service in Stephen's honour will be held on Thursday, October 10, 2019 at 2 pm with a reception to follow.

Donations in memory of Stephen may be made to the family to help in the support of his children.

Sharing of memories and condolences may be sent to the family by visiting Stephen's online memorial at www.jonesfuneralhome.ca or through the Jones Funeral Home Facebook Page.