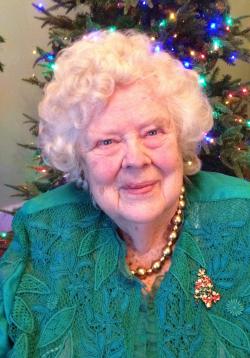 Ruth received her BA (Hons. Sociology) in 1942 from McGill University and then entered the McGill Law School. After receiving her BCL in 1945, graduating as the Gold Medalist, she was admitted to the Bar of Montreal and accepted a position with the Montreal law firm of Phelan, Fleet, Robertson and Abbott.

In 1946, she married Lt.-Col. George Stanley and after honeymooning in Baie St. Paul and Ile d’Orleans, they moved to Vancouver, then Ottawa, then Kingston, ON, and finally made their permanent home in Sackville, NB, in 1969.

Over the years, Ruth was recognized for her generosity of time and money to the communities in which she lived, receiving the Order of New Brunswick in 2010, honorary degrees from Mount Allison University and St. Thomas University, and the Centennial Medal. She was a member of the Order of St. John, the Order of St. Lazarus of Jerusalem, and the Order of Joan of Arc (Brazil). She was an honorary life member of the IODE (NB), Girl Guides of Canada, Imperial Loyalists (NB), and United Empire Loyalists' Association of Canada; honorary member of the Ex-Cadet Club RMC, NB Craft Council, NB Teachers' Federation, Kingston Historical Society, and the Westmorland Historical Society.  She was the first female member of the Fredericton Garrison Club and the first woman to head a hospital board in NB, chairing the Sackville Memorial Hospital Board and ensuring the building of a new hospital and medical centre.  She served as Honorary President of the New Brunswick Museum Board and was active on the Montreal Juvenile Court Committee, Canadian Federation of University Women, Home Reading Union, Elizabeth Fry Society, Glasfax, Once in Awhile Club, Sackville Art Association, the Keillor House Museum, Sackville Music Association, St. Paul’s Altar Guild, and St. Paul’s Bible Study Group.

She was an essential part of her husband’s writing career, often conducting research, compiling the indexes and editing the texts.

She encouraged her daughters to pursue whatever career they wanted regardless of gender, a message she passed on to other young women during her tenure as wife of the Lieut.-Gov. of NB in the 1980s. She often spoke on the changing roles of men and women at home and in the workplace, women’s financial concerns, and the richness of New Brunswick’s artistic community. She was passionate about promoting artists and craftspeople, and gave talks on her own personal interests, Canadian glass and silver, Canadian folk music, English porcelain and Lady Aberdeen.

Following the death of her husband in 2002, Ruth discovered the thrill of traveling, especially cruises, traveling far afield from Thailand to Chile, from Egypt to Antarctica. Highlights were the excavations at Petra, Jordan and the icebergs of Antarctica. She lived a full and active life, and will be greatly missed by her family, her many friends, especially those in Sackville, long-time friend Lillian Cook, Dr. Cory Long and caregivers who were so generous of their time and attention, Marguerite, Elizabeth, Angie, Paulette, Alice, Jennifer, Sandy and Sheila.

Arrangements are under the care and guidance of Jones Funeral Home, 70 Bridge Street, Sackville, New Brunswick.  Family and friends are invited to pay their respects at a time of visitation from the funeral home on Friday, February 24, 2017 from 2-4 and 6-8 pm.  A funeral service will be held at St. Paul's Anglican Church, Sackville, on Saturday, February 25, 2017 at 11 am.  The Reverend Dr. Ranall Ingalls presiding.

In lieu of flowers, donations can be made to the Sackville Memorial Hospital Foundation, 8 Main St. Sackville, NB, E4L 4A3  [email protected]

Sharing of memories and condolences may be sent to the family by visiting Ruth's online memorial at www.jonesfuneralhome.ca or through the Jones Funeral Home Facebook Page.