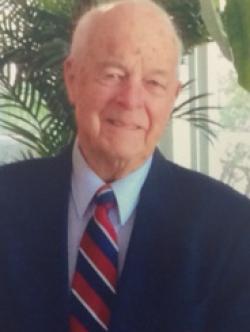 Following graduation from Lunenburg Academy in 1939 Doug accepted a position with the Canadian Bank of Commerce at Bass River, N.S., transferring to Shelburne and Amherst, N.S. respectively. In 1941 he enlisted in the RCAF and following training in navigation he joined 409 "Nighthawk" Squadron at Lille Vendre-ville, France. Doug was also a recipient of the Distinguished Flying Cross.

After the war Doug began a career with Atlantic Wholesalers Limited located in Sackville, NB. In 1962 he was appointed President, a position he held until his retirement in 1983.

A strong and proud supporter of his community, he contributed in many ways. As a member of St. Paul's Anglican Church he served as church warden, treasurer, vestryman and for 49 years as a member of the choir. He was a member of Branch 26, Royal Canadian Legion, Sackville Rotary Club, Kinsmen K40, and Sackville golf and curling clubs. He was past Master of Lebanon #28, Masonic Lodge and was awarded the William G. Quinn medallion in 2002 by Grand Lodge for dedicated service.

Doug supported the Sackville Memorial Hospital, the Heart and Stroke Foundation (N.B.) and was a former board member of the Victorian Order of Nurses, a past director of Atlantic Industries Limited and board member of Central Trust and Central Capital. In 1991, at Mount Allison University convocation ceremonies, he was presented the Board of Regents medal in recognition of his 18 years on the Executive Committee.

He was an avid fisherman and enjoyed many trips fly fishing for salmon on the Southwest Miramichi. He was also an amateur artist and did many oil paintings of scenes on the Tantramar Marsh; actively enjoyed his many years as a member of the Sackville Golf and Curling Clubs; but most of all loved his time spent at the family cottage in Murray Corner where he indulged his passion for early morning swims in the warm waters of the Northumberland Strait.

He was predeceased by his parents, his first wife Constance (Hopper) and his second wife Olga (Harris), four sisters, Florence, Ruth, Eunice (Ingham) and Norma (de la Ronde). He was the last surviving member of his immediate family.

Funeral arrangements are in the care of Jones Funeral Home, 70 Bridge Street, Sackville, NB (506-364-1300).  Family and friends are invited to a time of visitation on Friday, February 3, 2017 from 2-4 and 6-8 pm with a Masonic Service at 8 pm.  The Sackville Branch of the Royal Canadian Legion will hold a service Friday at 5:45 pm.  A funeral service will be held from St. Paul's Anglican Church on Saturday at 2 pm.

Due to family allergies, please refrain from wearing scented products.  In lieu of flowers, memorial donations may be made to St. Paul's Anglican Church Building or Memorial Fund, or a charity of choice.

Sharing of memories and condolences may be sent to the family by visiting Doug's online memorial at www.jonesfuneralhome.ca or through the Jones Funeral Home Facebook Page.